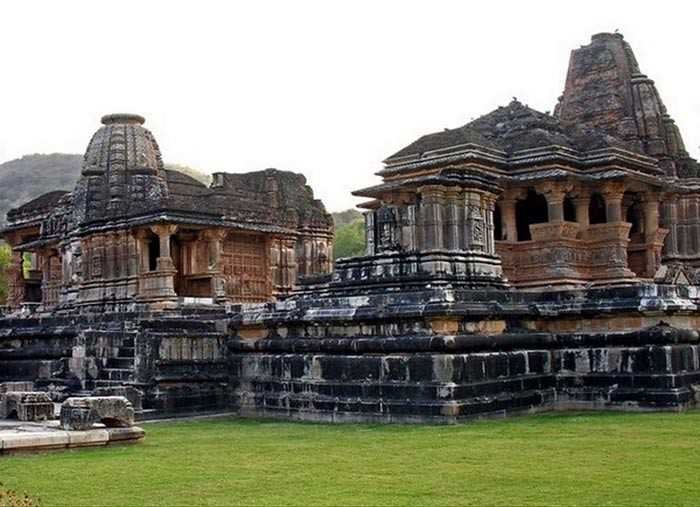 There are many interesting stories about who built the Eklingji temple. Whose essence is that Bappa Rawal did great service to a sadhu named Harit Rashi. With the inspiration of the said monk, he expanded the kingdom, it is said that when the sadhu started going towards heaven by sitting in the Harit Rashi plane, he called Bappa Rawal. But Bappa Rawal came a little later than the scheduled time, and the plane was slightly up. Sadhu Harit Rashi wanted to immortalize the body of Bappa Rawal. So he threw a ball from the vimana rising up towards the mouth of Bappa Rawal. But he did not fall on his face and fell at his feet. Then the said monk said that it has fallen on his feet. Therefore your descendants will equally enjoy the kingdom of Mewar.

The main entrance of the temple is towards the west. And there is a wall around it. Which was modernized during the time of Maharana Mokal (1477 – 1490 AD). While entering the temple a monastery is visible in front. The road located on the northern side of this monastery is the main part of the temple. Many small and big temples are visible as soon as you enter it. Which is like a corpse. The main temple of Eklingji Nath is facing west. In front of it is the idol of Nandikeshwar, the ride of Lord Shiva and many strong inscriptions. The Rathika on the right side of the temple houses the statue of Trailokya Mohan with 16 hands. This temple was undoubtedly built by Sutradhar Mandan. Because the form of the idols has been made on the basis of its appearance etc. There are two pools on the back side of the main temple. And there are many small Shiva temples. The most notable temple on the south side is the “Nath Mandir”. It is built upwards. The inscription of 1028 AD is inscribed in the Rathika outside it. And in the second chariot outside there is a beautiful statue of Saraswati ji. Which is an excellent artwork of 10th century.

According to Eklingji Temple History, initially this temple was the center of Lakulish sect. Sadhu Harit Rashi which has been mentioned above. There is no complete mention of his disciple tradition. They are mentioned incidentally in the inscriptions of Chittor of 1331 and 1335. So there is no doubt about the historicity. The Eklingji temple inscription dated 1028 is important for the study of the Lakulish sect. This article begins with Om Namon Lakulishaya. It is clear from the 12th line of the said article that these sadhus used to apply ashes on the body, wear the bark of trees and keep a bundle of hair on the head. The statue of Harit Rashi, built during the reign of Maharana Kumbha, is also noteworthy. It is kept in the cave in front of Vindhyavasini. On its head there is a bundle of hairs etc. At the end of the said article there are names of many sadhus like Supujit Rashi, Sayorashi etc.,

The monk named Vandagamuni is mentioned with great pride. Who defeated the Buddhists and the Jains. Fortunately, there is a description of this incident in Jain’s Lat, Bagad’s Guvvili also. An inscription dated 1171 AD has been found from Paldi village near Eklingji. In which the names of Janak Rashi, Trilochan Rashi, Vasant Rashi, Valkalmuni etc. occurred in the tradition of a monk named Khandeshwar. Shiva Rashi is mentioned in the inscription dated 1330 AD found from Chirwa village located near Eklingji. Which is called Pashupat-Tapasvipatih. He was a disciple of Maheshwar Rashi. These sadhus continued to work till the reign of Maharana Kumbha (1490-1525). A sage named Sivananda was a contemporary of Maharana Kumbha. It is believed that it had a conflict with Kumbha, and it went to Kashi. For this reason, in the writings of Maharana Kumbha, Eklingji Mahatmaya, Eklinga Purana, Raimal’s Eklinga Prashasti, etc., these sadhus have been neglected a lot. A sadhu named Narahari seems to have come back here. An inscription of 1592 AD has been found from here. There is a mention of a monk named Gargacharya of 1602 AD. Later, in place of these sadhus, Dandi Swami sadhus were installed here. Among them, a monk named Ramanand came here first. Even today, the Mahants live in their tradition.

Lord Eklingji has been called the overlord of Mewar and Maharana as Diwan. Therefore, all the arrangements for this temple are still done by the Ekling Trust run by Maharana. Whenever Maharana used to enter the temple, he used to carry a gold stick in his hand. This is a sign of the fact that he is a Pratihari of Eklingji. For a long time the rulers of Mewar have been working for the arrangement of this temple. It is mentioned in the later inscriptions of Maharana Hamir. Maharana Kheta had presented a village named Panwar for the arrangement of this temple. Maharana Lakha presented Chirwa village and his son Mokal had presented Vadhanwada, and Rama village. In the last days of Mokal, the Sultan of Gujarat attacked this temple and some part of it was ruined. Maharana Kumbha made it back and beautified it. Due to the location of the temple on the main road from Gujarat to Delhi, there was always a fear of invaders. It was also fragmented during the reign of Maharana Raimal by Sultan Ghiyasuddin Khilji of Malway. Which was renovated back by the said Maharana. Maharana Kumbha had presented the villages of Nagda, Kathdavana, Malkheda, and Bhimmana for the worship arrangements of Eklingji Temple. Maharana Raimal had presented Nauvapur village. In this way almost all the Maharana had been making such arrangements. During the time of Maharana Bhim Singh, when the Maratha invasions started becoming more and there was internal disorder, then the Eklingji taluk village was also taken over by others, then the said Maharana had carved about three feet long copper plates and presented them back to all the villages. There are many inscriptions in the temple. The oldest of these dates back to 1028 AD. Which has been mentioned above. Apart from this, there are many inscriptions of Maharana Mokal, Raimal, Jagatsingh, Raj Singh, Sangram Singh II, Bhim Singh etc. And more than 40 Tampatras are stored here. The position of the temple is between the famous ancient places of Nagda and Delwara. It is both a Jain and Vaishnava pilgrimage site. Hence its importance is very high.

Eklingji Temple Darshan timings and worship arrangements are also noteworthy. There is worship three times daily. Once in the morning, the second time in the afternoon, and the third time in the evening. There are three aartis all three times. This type of worship with chanting is rarely seen. There are festivals several times a year. Among them the festivals of Akshaya Tritiya and Shivratri etc. are notable.

places to visit in connaught place

best places in delhi for couples