What are The Causes of Weak Erections? 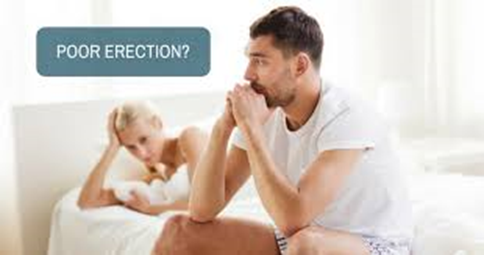 What are The Causes of Weak Erections? Erectile dysfunction is a medical term that refers to a weak erection that is not strong enough. It is dependent on numerous aspects, including the person’s age, overall health, hormone levels, nerves, and blood flow as well as his or her mental state and emotions, to achieve an erection. When any of these variables are compromised, a weak erection follows.

As people get older, their chances of developing erectile dysfunction increase. Age, on the other hand, is not the sole factor contributing to a weakened erection.

It is believed that atherosclerosis, or the narrowing of blood vessels in many parts of the body, is the most prevalent cause of erectile dysfunction and that it can serve as a warning indicator for a subsequent heart attack or stroke. Diabetes, chronic kidney disease, multiple sclerosis, and Peyronie’s disease are some of the other medical problems that put men at risk for erectile dysfunction, according to WebMD.

On a regular basis, do you take any medications, whether prescribed or over-the-counter? It may be difficult for you to get or maintain an erection if you are using certain medications, such as antidepressants, antihistamines, or blood pressure medications. While these medications may be used to treat a specific condition, they may also have an effect on hormones, nerves, or blood circulation, all of which might raise the chance of developing erectile dysfunction. If you suspect that a drug is the cause of your ED, it’s advisable to speak with your doctor about your options. Causes of Weak Erections

Have you and your partner been arguing recently? Relationship issues that cause stress can result in an inability to communicate effectively in the bedroom. Depression, anxiety, low self-esteem, guilt, and the fear of sexual failure are all elements that might play a role in this process.

On a daily basis, making poor health decisions may have an impact on your capacity to obtain an erection. Men who are overweight, who smoke frequently, who drink excessively, or who use drugs are more likely to suffer from erectile dysfunction. Blueberries, for example, include a high concentration of flavonoids that helps to lower the chance of developing erectile dysfunction. Increased flavonoid consumption also assisted males in smoking less, drinking less, and engaging in more physical activity.

Due to the fact that 30 million Americans already suffer from erectile dysfunction, a number that is expected to climb to 320 million worldwide by 2025, it is critical to take an active role in your healthcare decisions. In the event that you are having impotence, speak with your healthcare practitioner and express your concerns about possible underlying causes.

Addictions to the following substances can also result in erectile dysfunction:

Dealing with a weakened erection

The doctor will review the patient’s complete medical history and conduct an investigation to determine the root cause of his erectile dysfunction. They will inspect the penis and testicles for evidence of injury, as well as the person’s nerves, to determine whether or not he or she has any sensation. They might offer a variety of therapy approaches depending on the underlying problem. All treatments have risks and benefits, which will be discussed with you by your doctor before beginning. Causes of Weak Erections

The following are some of the therapy options:

Medications: Medications that generate a strong penile erection are effective in treating erectile dysfunction in the majority of men who take them. Boosting the quantity of blood flow to the penis is how these drugs function. They do this by increasing the amounts of nitric oxide in the blood. Examples include the following:

If a person has heart problems or experiences regular decreases in blood pressure, they should avoid using them because they could be harmful. As a result, if you are suffering from any of these health problems, consult your doctor before taking any drugs. Causes of Weak Erections

Among the several drugs available to treat erectile dysfunction are: